Custom-made orthotics are typically an investment made during some desperate phase of life that usually involves a chronic injury. This desperation can sometimes be met with less than successful results. In spite of this fact, most people would benefit from orthotics, but the success comes when they are purchased before being injured, and here’s why:

First of all, custom orthotics are not just for runners with foot problems. The feet are the foundation of our entire structural system and are the sole or contributing cause of many structural problems. So, if you’re suffering with low back, hip, hamstring, calf, sciatic or other problems, even upper body, your feet will usually be involved. If we don’t balance and stabilize the feet as our primary goal, we limit the potential benefits when attempting to correct and balance our structures.

Generic orthotics that can be purchased “off the shelf” have limited benefits. Just as you would never think of wearing some generic running shoe from “off the shelf”, don’t be cheap when it comes to one of the more important decisions you’ll make involving your body. Your foot is made up of 26 bones, 33 joints, and 126 ligaments, muscles and tendons. Your biomechanical longevity will be greatly impacted by keeping your feet happy.

Many patients of ours resort to buying orthotics only after an injury. With a proactive, instead of reactive, management of the structure, many of their debilitating injuries could have been prevented. Keep in mind, our goal is to help patients prevent injuries as well as resolve injuries that are present. Again, paying now is always less than paying later.

Foot Exam
The examination of the foot will be performed to assess structure. Both feet should have a similarly high arch, so that a good chunk of fingers can make it under the arch. If the feet are flat, different in arch height or have excessively high arches, custom orthotics are imperative.

A study of shoe wear will be done next, looking for different wear patterns on the base of the two shoes. If the achilles tendons bow or bend due to pronation of either foot, this adds to the urgency for orthotics. If either toe points in or out when standing, orthotics may be necessary. Finally, upon standing, the center point of the knee cap, and then the bump on the bone (tibia) just below the knee cap will be observed. They should be almost in line with each other. If the alignment between the two points is more than a ¼” off, orthotics may be recommended.

Your provider will then decide what type of orthotics will suit your body the best. In most cases, your provider recommends a softer orthotic, which will allow the foot to move in its full range of motion, while providing shock absorption in the heel with each foot strike. Some orthotics have better shock absorption than others, and this is an important factor considered when deciding on which orthotics will best suit the patient. Softer orthotics allow shock absorption as well as necessary normal foot motion which is easier on the foot, leg, and low back. If the foot is unable to move in a complete and normal manner due to the restriction of the orthotic, this can alter the normal motion relationship between the foot and the rest of the body.

The method used to get fitted for your orthotic is important too. Some doctors use the neutral casting method, which casts the foot in a non-weight-bearing position. The preferred method at Spine & Injury Clinic of Laramie is to have the foot evaluated and scanned in a weight-bearing position so the influence of gravity can be considered.

Conclusion
Custom orthotics are the very beginning of learning more about your biomechanical system. The foot is the foundation of your entire structure, and imbalances in the low back, neck, hips and entire muscle system can certainly originate from the feet. If attempts are made at correcting any structural condition without first considering the feet, the benefits will be limited.

So ask your provider for a complete structural foot exam in the standing position with an evaluation of the wear patterns of your shoes. This should be done at least once a year on all athletes. Finally, in some cases, standing x-rays of the low back can help make specific structural recommendations. 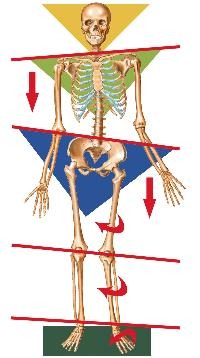 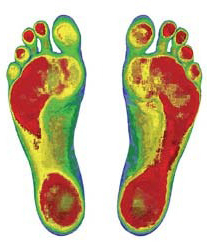 Pronation & Supination
These are two normal movements, which take place in many joints of the body. In the foot, the main joint where these movements occur is the sub-talar joint (or lower ankle joint). As we walk the heel hits the ground and the foot pronates, which causes it to roll inwards and the arch to lower. At the same time, the leg bones twist inwards slightly. This is a shock absorbing movement and the midfoot is slightly unstable at this time.

As weight is moved onto the ball of the foot, the opposite movement (supination) should occur at the subtalar joint (lower ankle). This makes the foot more stable, lifts the arch of the foot, and creates a secure platform, which is important because the other foot is now swinging forwards to take the next step. Once this has occurred, the heel can lift easily and we push ourselves forward from the ball of the foot and toes. These are normal movements; it is just that some of us have more or less of one than other people.

The cycle of pronation and supination movement occurs with every step we take. In feet with lower arches, it is often easier to see pronation because the Talus (ankle bone) tends to drop down further into the arch. In feet with high arches, it is more difficult for the talus to drop and this causes the leg bones to twist slightly more inwards instead.

Get the latest news and information from us when you sign up for our newsletter.